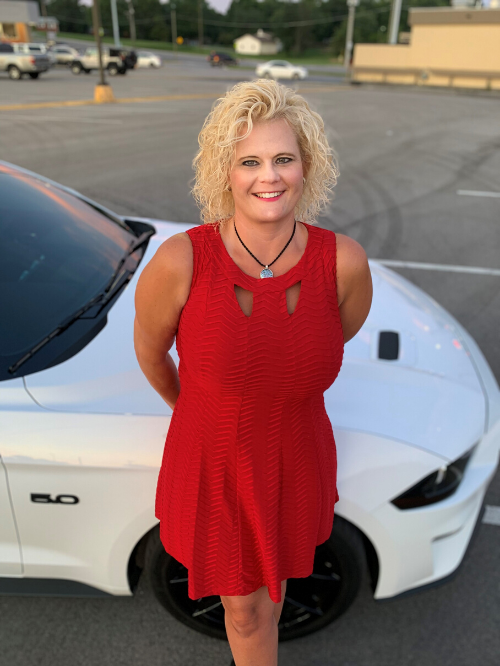 Christie is a native East Tennessean. Before becoming a Realtor, She worked for ten years as a nurse in a family practice. She has been an Executive Ambassador for the ride share company Lyft, and in her younger days even worked for a time as an over the road truck driver. She certainly isn’t afraid of hard work.

Her passion to help others and her love for Real Estate allows her to form a special bond with her clients. She strives to follow the “golden rule” and to treat every client exactly the way she would want to be treated.

Aside from Real Estate, Christie enjoys spending time with her husband Lee and their two boys, Brandon and Kirkland. One of her favorite hobbies is singing karaoke. She also enjoys being cast for small parts in television shows. She has appeared in the audience on “The People’s Court” and “The Maury Show”. She has also played small roles in “Snapped”, “Murder Calls”,“Fatal Attraction”, “Dying To Belong”, “Nashville”, “Vengeance”, “Killer Couples”, “Storm of Suspicion” and “Mark Of A Killer”.

Select any listing for more info

Christie was Amazing from the Get Go!

"Christie was Amazing from the Get Go! From the moment she took our Cold Call, she found us homes to look at appointments to keep, within 2 hours. Though we made it clear that we were Serious about Purchasing, but only looking on this particular day (because we were from out of state) that we would be calling her again and using her as our Agent. As time progressed, we stayed in touch and Christie kept us abreast of the market and what was and was not available. Within several months, we were ready to Purchase and the search began. Christie made herself available to us and answered any and all questions to the best of her ability and those answers she did not have, she quickly found someone who did and came back with what we needed to know etc. Though purchasing a home is not always as smooth as we would like, Christie never let us down and worked hard to make this a positive experience. If you need a Realtor, Christie is The One! Christie is Second to None and will Not leave you disappointed. Pick the Best Realtor in Tennessee..... Christie Reagan."

"We closed from out of state"

We both highly recommend Christie Reagan

"The very first time she came to our estate, she planted a For Sale sign next to the mailbox at the street where we lived. The next day she had potential buyers inquiring about our house. Everyday for about a week she set up appointments to view our house and got several interested clients. Christie dressed professional on every occasion. Anytime we had questions, she got back with us quickly with an appropriate response. She sold our house while she was also looking for us a Condo to move into, which she found. With the proceeds from the sale of our house, we were also able to pay cash for the Condo, which we love. We both highly recommend Christie Reagan."

"Christie helped us land our dream home. She was very responsive and she even checked in with us after moving. Great lady! She showed us multiple homes and showed us the house we chose multiple times. She was always ready to help with any questions we had. She made the process super easy."

She is professional and always very willing to help with any part of the selling process.

Christie was always available to respond to my questions, even after hours. She is professional and always very willing to help with any part of the selling process.

Very awesome person to work with

"Very awesome person to work with, super helpful on giving Ideas. She's very quick to respond on any questions that were asked and goes extra lengths to find out the answers. Very flexible on her schedule and is super nice. Would recommend her to anyone." -Dylan Collett

Very prompt and knowledgeable about the market in Knoxville

Christie was great to work with. Very prompt and knowledgeable about the market in Knoxville. Always brought up comps and other things to consider was ready to move fast in a hot market - Constance Bailey

Christie is so caring and friendly

"Christie is so caring and friendly. She took the time to get to know me personally and, because of that, she was able to walk me off the ledge many times. She went above and beyond what any realtor should have to do. She is so crazy efficient! She does everything immediately. I bet this girl doesn't have a to-do stack. She just does it...no stacks. I found her to be kind, considerate, friendly, informative, timely, thoughtful, expeditious, helpful, willing to get her hands dirty, and knowledgeable. I feel like I have a new good friend."

We were so fortunate to find Christie when we wanted to sell our home.

We were so fortunate to find Christie when we wanted to sell our home. We cannot speak highly enough of her! She was always quick to answer any concerns we had and made the process very easy for us. I'd recommend her to anyone!

She was amazing! Very personable, professional and friendly. She worked with me for over a year to find my house. I would definitely recommend her to anyone I know!

Christie did a great job in all areas

Christie did a great job in all areas. She’s upbeat,easy and fun to work with. Very responsive and knowledgeable. She was quick to set up showings on the houses we wanted to see and gave us history on the listings."

A Phone Call Away Day or Night

I highly recommend Christie. Through the whole home buying process she has literally been a phone call away day or night. I feel she was truly there for me and not just to make a sale.

As Stress Free as Possible

We moved from IL to TN. Christie made finding a new home extremely easy and as stress free as possible. She is personable and caring. We would definitely recommend her!!

Christie was amazing in helping me list and sell my home during a crazy pandemic. She kept me informed and handled all the details to make it a turn key process from listing all the way through closing. Highly recommend and plan to use her to help find future property.

She goes above and beyond for all of her clients!

I have had several real estate transactions but I have never had an agent like Christie Reagan. She goes above and beyond for all of her clients. Seamless transactions, follow up and follow through. She attends every closing and then checks on her clients afterwards. I really could not recommend a better agent and I will never use another agent! - Stephine

I would recommend Honors Real Estate Services to anyone...

Christie Reagan was a God send for me. Her knowledge of just what we needed to do, when and how to get it done just shows her expertise in how to quickly and efficiently take the project presented to her and quickly get it done without a waste of time on her part or mine. I would recommend Honors Real Estate Services to anyone who wants a really friendly and pleasant experience to go thorough the process.

Christie went above and beyond

Christie went above and beyond to help me sell my home. Her attention to details and expertise in the field helped me when placing my home on the market. She was then whenever I needed her or had questions as well. I would definitely recommend her to anyone looking to sell a home!

Christie made everything so easy for us.

Christie made everything so easy for us. She was kind and very responsive to all our needs. We will most def use her for any purchases in the future. Thanks!

Christie is your realtor!

If you are looking for a very tenacious realtor that keeps your best interest in mind and will keep you informed, Christie is your realtor! She goes out of her way to do whatever it takes to get you top dollar for your property. Having local knowledge and doing extensive research got the results we were hoping for.

Does her research when posting a house to sell. Knows the Harden Valley area as she is from this area. Very friendly and knowledgeable in real estate. Has high tech cameras to do a 360 view of your home. Plus a photograph that turns your beautiful home into something more beautiful. She will work with you and around your schedule.

I would recommend Christie to all of my friends

She is very good and hard working. I would recommend Christie to all of my friends. She helped me find a nice house and I am happy with her work. She answered all of my questions and helped me with what I needed to do to get the house I wanted. Thanks so so much Christie!

She was very professional...

Christie is an amazing real estate agent. She was very professional and made you feel like you were her only client, even though she was very busy. She made herself available to us and never tired of showing us property. She was a joy to work with and I would gladly recommend her to my friends and family. - Patricia S.

Christie was a true professional...

Christie was a true professional in every aspect of our transaction. Her dedication to us as clients was beyond reproach. Christie continuously went above and beyond what was required. Christie comes highly recommended!!